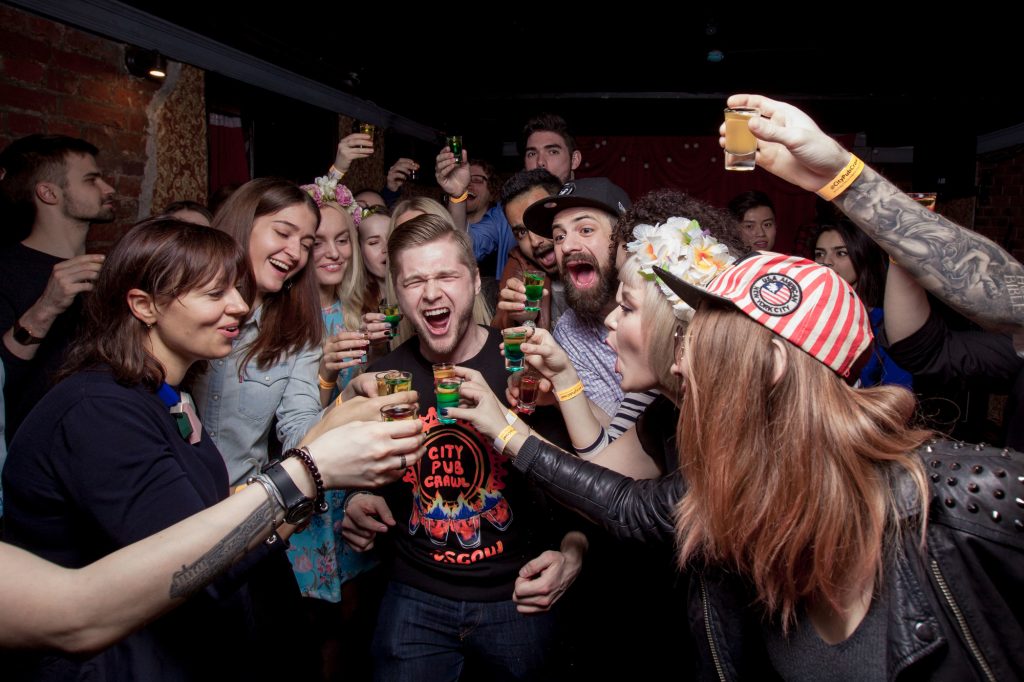 Doing a pub crawl is the perfect way to explore local nightlife, have fun, save a small fortune, and meet new people when you’re travelling. Your new drinking-buddies are made up of some wonderful, and often wonderfully weird, people. It’s the beauty of travelling – the mixture of characters and personalities you’ll encounter that will add colour to your experience, memories, and stories.

Here’s 30 ‘types’ of people you’re almost certain to meet on a pub crawl. Which are you?

All coupley and loved-up, these two are kind of cute, kind of annoying, in equal measure. They take every one of their free shots together, eyes locked and arms intertwined like it’s their wedding day, and will have all us lonely hearts in envious awe, before, most likely, having a massive ‘domestic’ in front of us all by the fourth pub, and making up, with gin-soaked passion, in front of us all at the fifth pub.

This guy or gal is somewhat of an enigma, obviously more than twice, or even three times, your age, but way cooler than your mom or dad ever could be. You just know they’ve seen some wonderfully weird and wacky shit in their lifetime of travels so far, part of you wants to listen to them tell stories about growing up in the 70s all night, and part of you wants to be them when you’re their age, whatever age that is.

This one is shy, has avoided making eye-contact and evaded conversation for the first bar, and tends to watch proceedings from a distance, like a nature documentary maker. Probably travelling for the first time and maybe a little nervous. This is the one the guides gradually coax out of their shell, gets chatting with, and in measured movements integrates them into the group proper. They just need a little encouragement and before you know it, they’re in the thick of it, dancing, laughing, and making friends like a natural.

The very friendly one

This one just wants to be liked & loved, and tries hard to be everyone’s friend! They’re very nice but maybe coming on a little too strong from the off, something which can be confusing as it’s an odd kind of contradiction to be annoyed by somebody who is being really nice. A free shot or two might make things easier!

They’ve already spilled their free welcome beer, accidentally tripped up the pub crawl guide, and mistakenly sat on a stranger’s lap in a dimly lit part of the bar, thinking it was an empty seat…and it’s still just the first pub! They’re having fun though.

Their first time on a pub crawl, and if they’re American and under 21, very likely their first time out in a proper pub at all; well, legally anyway. They don’t really know what to expect and approach the whole thing with either cautious, giddy nervousness, or a full-blown, balls/tits out, “imma get fucked-up” attitude.

Everyone is somebody’s definition of ‘hot’, but you know the type I mean here – those guys & girls that just effortlessly ooze sex appeal. They come in all different shapes, sizes, and sorts, but just stand out from the crowd thanks to some kind of striking ‘je ne sais quoi’ that has them in a league of their own, and usually has the rest of us fawning over them.

They do things their way, live by their own rules, have been off the beaten track, and are open to wherever their journey may take them. They’ve got some crazy stories to tell, and extol the virtues of travelling solo vs with friends – growing as an individual, not having to compromise, and enjoying ‘alone time’… and by the forth pub & sixth drink they’ll be telling you how much they “love you guys” while making plans to travel with you forever.

This snap-happy one is addicted to selfies and documenting their night with a picture every 140 seconds. You’ll actually be avoiding this one eventually, just to give your smile muscles a break.

This guy or gal relishes an audience and provides ample amusement throughout the night – toying with the long suffering guide enroute between pubs, providing belly-laughs with perfectly timed one-liners, and eventually dancing (sometimes shirtless) on the bar in homage to Coyote Ugly.

This one thinks they’re being seductive, but really they’re verging just a little too close to creepy…..you know the like – extended eye-contact from way across the bar, cringe one liners, and hair-swishes they’ve learned from the slow-motion bits of shampoo commercials.

The group of lads

All wearing slightly different versions of the same shirt & jeans ensemble, the air around them smells of testosterone, hair gel, and buckets of after-shave. The banter is strong, the volume is loud, and bros come before hoes. Boys on tour, innit.

The group of girls

Excited for girl’s night out, they disappear to the toilet as a group at least once in each pub, request a Beyoncé song at least once from every DJ or band, and there’s an abundance of cocktails, hair-spray, and high-heels which before long are being cursed as the most un-wise footwear for a night-time activity that involves walking between numerous pubs & nightclubs.

The one who can’t handle their drink

They’ve had their free welcome beer and just one of their many free shots yet, and they’re already in bits, getting wobbly, and seeking out the closest toilet to barf in. Time for some water and for your friend to take you back to the hostel….grab a slice of pizza on the way, everything will be fine!

They’ve literally been double-fisting double whiskey and reds all night and you’d swear they hadn’t touched a drop. You look on in wonder and awe at their prowess and just know they’re one of those lucky rare species that don’t get hangovers.

The guy or gal who comes back to do the pub crawl night after night for free. When you join us on the pub crawl once, you can come back as many more nights as you like for free with your wristband. This one enjoyed it so much the first time round that they’ve extended their trip indefinitely, and eventually ask for a job as a pub crawl guide by night 8 or 9.

This one has been out every night for the last four and a half years and is happily living a fulfilling, functioning daily-life on four hours of sleep per night. The life and soul of the party, they’ll be dancing and singing without a care in the world and getting everyone else involved too.

They’ve been tapping their feet since they got their wristband on, and every sound is music to their ears. They’re the first ones to boogie in every pub, even when there isn’t a dance floor, the beat lives within them and they cannot wait to get to the club to really let loose.

They make their way through the group throughout the night, working their magic and managing to make out with a few fellow crawlers, as well as a few locals too – sometimes all together!

This is their 28th pub crawl in Europe this year. You’ll know because they’ll tell you. Many times!

The ‘I worked on a pub crawl in…’ one

This one was a pub crawl guide for 5 days in some city a few months ago and is now an expert pub crawl guide, in fact, probably the best that ever was. You’ll know this because they’ll tell you. Many times!

They’ve latched onto the guide who is now the centre of their universe, and who can blame them?, our pub crawl guides are some of the nicest people on the planet. They’re helpfully assisting the guide, herding the crowd, lending a hand collecting the finished free shot glasses, and reminds the guide that they “have the greatest job in the world” every 30 minutes.

They’re doing trick shots and flipping cups with their butts.

Their hand-eye coordination is non-existent, they resort to blatant distraction tactics to disrupt their competitor’s flow, and they’re still trying to flip that cup when it’s time to move to the next bar.

This is the guy or girl that could easily be the love child from a one night stand between Urban Outfitters & American Apparel; they’ve got a 35mm camera, plaids, will only drink craft-beers or whiskey and, in the case of the fellas, sport a fetching neck-beard or moustache.

They’ve just come from a 2-week stay on an organic farm and are on the way to a rainbow gathering, their other pants are also fisherman pants from Thailand, and they’ve given you a Tibetan prayer flag.

Within 15 minutes of arriving to the crawl, they’re asking the guide where they can get some bud…not Budweiser.

You can tell they’re a little embarrassed when they rock up in their velvet suit / glittery ball-gown.

Literally, zero fucks given as to their attire – “Is this a string vest wife-beater kind of night? Yeah, that’ll do”.

This one issues a disclaimer at regular intervals that how they’re behaving is out of character….they’re usually a teacher, pastor’s son or daughter, or straight-laced straight-A student who has let loose and gone uncharacteristically wild, guzzling beer, downing shots like a pro, and absolutely loving it!

10 Things To Know About Pub Crawl In Europe